Sometimes when you depart a country you have a feeling that you will return; Afghanistan was not one of them when I left my first visit a year and a half ago. It is a nation deeply troubled, immersed in war, torn apart by forces from without as well within, deeply divided by religious and tribal ideologies, and racked by poverty. It was for these reasons that I had doubts of ever setting foot on its soil again, and it is precisely for these reasons that we are returning. 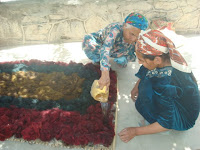 On that first trip we found a country whose tourist industry was comprised solely of military forces and foreign nationals, and an export trade (other than opium) nearly non existent. Three decades of war have destroyed traditional income-generated opportunities and created a culture dependent on those who serve the war machine. Nor does it have the infrastructure in place to support the export of artisan crafts. In December of 2007 we placed our first orders with 6 different artisan groups. Although they were ready to ship in January, an exporting process whose details were little known to artisans and 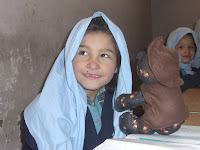 authorities alike, corruption, and in one instance terrorism and death of the cargo specialists who were managing the shipment, delayed it until September.

Our first trip brought a ray of hope to artisans, a hope that their crafts could become the basis for sustainable income for themselves and their families. Westerners, and particularly the U.S., have acquired an image for starting programs of good work and then walking away before they can become self-sufficient and sustainable. One World Projects does not want to add fuel to this stereotype. Hence we are embarking on this second trip to Afghanistan for one week to reconfirm our commitment to our existing artisan suppliers and to develop relationships with new Afghan artisans.
In the second week of June we will take you with us to India to visit the slums of Chennai, where blind and handicapped women weave beautiful handbags from recycled plastic bottles, to Delhi where Tibetan refugee artisans produce brocade purses and yoga mat carriers, then onto Moradabad where Muslim families make works of art from recycled sheet metal, and finally to Dharamsala to visit Tibetan nuns.
Please come back to read our blog over the next 2 or 3 weeks; we hope that it will be an enjoyable and educational experience.
Posted by One World Projects at 2:59 PM