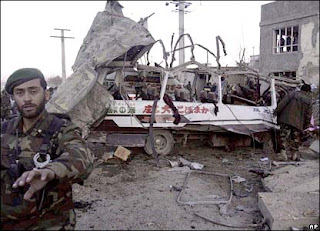 It is the third suicide bombing in Kabul this week and you can feel the tension in the air. Even our driver admitted last night that he was somewhat anxious to be driving around Kabul. Yesterday, a suicide bomber drove up next to a bus carrying Afghan soldiers and blew itself up, killing 6 soldiers, 7 civilians, and injuring dozens of others. One of the civilians killed was the cousin of Aid To Artisan’s driver who just happened to be in the wrong spot at the wrong time. Violence of this type is on the rise in Kabul and local people are worried about the prospects for the future in this capitol city.

We visited two NGOs working with women who have been afflicted by the war: Women for Women and The Children and Women Education Fund (CWEF). 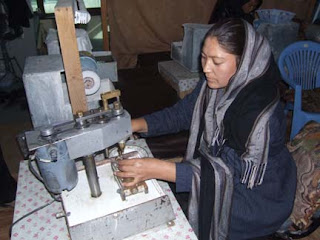 Women for Women in Afghanistan is part of a larger international NGO; Women for Women International. Their mission is to provide women survivors of war, civil strife and other conflicts with the tools and resources to move from crisis and poverty to stability and self-sufficiency.

Women for Women in Kabul provides business skills, vocational, and life-style training to thousands of Afghan women. They also provide loans to more than 4,000 women use the funds to establish their own micro-enterprises.

We asked the artisans to develop samples of several matching fluorite necklaces and bracelets in aqua marine, light blue, and purple. 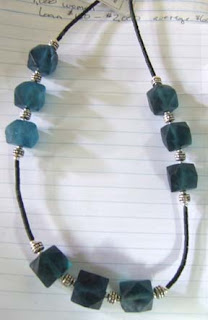 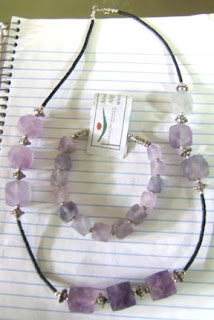 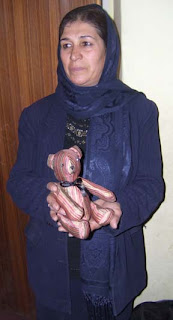 The second NGO that we visited was the Children and Women Education Fund (CWEF), a Kabul-based non-government organization that provides education, vocational training, and instruction on women and children’s rights to more than 320 women.

We are working with this organization to create an Afghan teddy bear program in which a teddy bear will be given to an Afghan child for each that is purchased in the U.S.. Charity USA and One World Projects each placed orders for 300 bears--with an aditional 300 bears purchased and left behind to be donated to children. CWEF will also develop samples for an Afghan apron we hope to carry in the future.
Posted by One World Projects at 8:05 PM